THE P130-billion Mandani Bay project in Mandaue City is expected to be completed earlier on the back of a strong market demand. This signifying that luxury condominiums are gaining ground in Cebu.

Gilbert Ang, project director at HTLand, the property developer behind Mandani Bay, said that it is now possible that the completion of the master-planned township development will be in 10 years from the initial 12 to 15-year timeline.

“We will be ready to turn over phase one by March 2020 and phase to by the fourth quarter of 2021,” he said on Tuesday during the launching of Mandani Bay Quay, the newest addition to the waterfront community.

HTLand is a joint venture between the Gaisano-led Taft Properties and one of Asia’s leading property and investment groups, Hong Kong Land.

The premium 20-hectare development seen to add 10,000 units to Cebu’s condominium inventory upon completion was launched in May 2016. Simultaneous with the launch of its first phase, the Mandani Bay Suites. All units were sold in just a little over a year.

Among its amenities is the Active Zone, located right in the middle of the property’s enclave, which is exclusive to residents of Mandani Bay. It will feature a 50-meter lap pool, cabanas, a clubhouse, a multi-purpose court, a sports hall, adventure playground and an outdoor fitness facility.

“When we did our projections, we wanted to only sell 30 units a month, but we managed to sell 80 units,” said Villa.

Meanwhile, Ang said that what caught them by surprise was that 70 percent of their buyers were Cebu-based while 30 percent were foreigners, mostly from the US.

He said 50 percent of the buyers bought their units to live in while the other half bought theirs for investment purposes. Capitalizing on the appreciation of the price and the property’s potential once fully developed.

In an earlier report, property and research firm Colliers International noted there was a higher rental take-up in luxury condominiums in Cebu. Most likely due to several factors, including tourism and the influx of multinational company executives residing in the metropolitan area.

The firm pointed out that Cebu, being a key investment destination, attracts high-ranking local and foreign executives employed by the top outsourcing and industrial companies.

“The outsourcing sector’s contribution to total demand for luxury condos should be sustained by the continued inflow of foreign outsourcing investments into the city,” Colliers added. 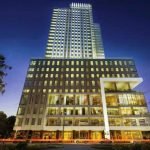